@setsphere is a visual effect that's applied to the final step of world rendering and acts on pixels that fall within its sphere of influence.

For instance, when using the blending mode each pixel on the screen that is contained by the sphere will be blended with the sphere's colour according to a linearly increasing (or decreasing) mix value.

If you're having problems visualing what that looks like: imagine standing in pitch blackness with a lightbulb hat that evenly brightens the area around you. The exact spot where you're standing is at normal brightness, but 5m away everything is only 50% as bright and at 10m away (and beyond) all you can see is total darkness. (Note that @setsphere does not actually emit - or in any way affects - light)

If you're familiar with 'vision spheres' the first screenshot below should look identical to those. However keep in mind that @setsphere only interacts with pixels that intersect an imaginary sphere around your avatar and hence does not actually obsure anything when looking from the outside in.

To illustrate, if you move the camera further back in the previous example you see the second screenshot below. Even though the camera is firmly in the 'all black' zone you can still see the avatar standing in its 'brightened' area and objects outside the visible area (like the tree in the center of the image) can still be made out as a silhouette.

The current implementation of @setsphere (and hence anything documented or discussed on this page) is by no means final. The first implementation is intented to start a dialog with script creators on what is desired and hopefully spark ideas and thoughts on what's possible beyond the boredom of simply reducing someone's SL experience to the 2m around their avatar.

All comments and suggestions will be taken into consideration. However, keep in mind that once this is merged into Firestorm things will be set in stone.

@setsphere is a visual effect only and as such does not impose any restriction. If you want to limit the camera distance you can use the appropriate @setcam_XXX restriction to accomplish that.

If you feel there's another restriction that you need to create the experience you want, please do let me know.

While the original intent, it's not currently possible to a build a compatibilty layer for @camdraw[min|max]. @camdrawmin and @camdrawmax each take a distance value and are supposed to mix the sphere colour with the actual colour but the drop-off at the inner distance is virtually instantenous.

Below you have a example of a blending sphere starting at 5m (with alpha 0) and ending at 25m (with alpha 1). Full bright white prims were placed every 5m highlighting a point where the brightness should have dropped by 25% (with a linear distrbibution).

With @camdrawmin/camdrawmax only the first prim (which is still within the unaffected radius) is visible and the drop-off past the 5m is so tight that not even the first prim at 10m is visible at all. With @setsphere you can see the inner prim at 5m, as well as the next 3 prims at 10m, 15m and 20m with decreasing brightness and then finally the one at 25m which is completely black and not actually visible.

To simulate what's visible under @setsphere from 5m to 25m the @camdrawmax value had to be increased to 90. If at any point it becomes possible to calculate @camdraw[min|max]'s distance value back to metres I'll add support for them. However, given that script creators will have likely tailored their values to a specific implementation it's better to provide no support in RLVa rathen than support something that looks completelty different from RLV to RLVa and vice versa.

@setsphere is the main (and only) restriction for the sphere effect. Just like @setoverlay (or @setenv) you will need to issue a series of force commands to change the appearance and/or behaviour of the restriction to your liking.

Modifier commands are of the form @setsphere_<modifier>:<param>=force and apply only to the object that issued them. If multiple objects have have their own sphere they can change their own effect but not influence another object's. The end result of multiple spheres will be cumulative (e.g. for blending the colours will mix for an alpha that is lower than 1.0). If you ever want to unset a modifier value you can issue the force command without specificying a vlue (e.g. @setsphere_param=force).

The 'distextend' modifier specifies how the areas on both sides of the sphere should act.

If the above wasn't clear hopefully the following 4 pictures will make it clearer. Pure black pixels signify areas that are unaffected by the effect; any shade of gray signifies an area where the effect strength is between 0 (=black / not at all) and 1 (=white / full). (If you have any Photoshop experience think of the images as a blending mask) 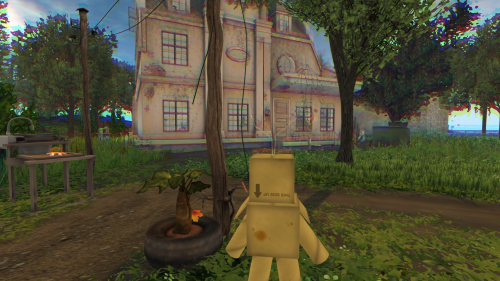 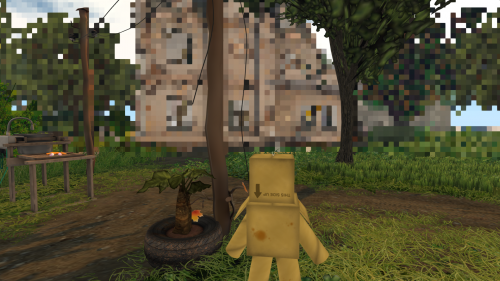 Selective questions that I'm asked (or clarifications given) will appear here.