The Second Life viewer can download a significant amount of data for every location you visit (easily hundreds of MB). In order to save on repeatedly fetching the same data and to speed up the rendering of places you visit frequently the viewer has a local cache that can be up to 10GB in size.

The viewer cache is less than ideal and while it tries very hard to be smart, doesn't get it right nearly as often as it should and can not be shared between different computers / viewers. How often have you teleported home after exploring only to find you have to wait while it downloads again.

A squid proxy cache acts as an intermediary between the viewer and Linden Lab. It fetches the data requested by the viewer and stores it; should it be requested again, it provides the copy it has already downloaded almost instantly.

This makes up for the viewer cache's tendency to forget all the things you would rather it didn't and allows you to run with a much smaller local cache. It can easily be shared by multiple computers in the same household.

The size of a squid proxy cache is only limited by the amount of disk space you can spare, and it can run quite happily on older / recycled hardware. The software is free open source.

This guide based on one first published on the Phoenix / Firestorm Wiki and requires some technical ability, It will work with any recent Second Life viewer.

Use the terminal for all the instructions in this guide. You will need root (sudo) access and your password.

First step is to install GCC and buildtools

The source code is available from here, we want the 2.7 version.

Compilation is pretty straight forward and doesn't require any special tinkering. Takes a couple of minutes on an i5. Squid will be installed into /usr/local...

Copy and paste the following :

Then press CTRL+X to exit nano and save the changes.

When back at the console, make the file executable with :

This is a bit of a pain as the config file is very long.

In nano you can press CTRL+_ to go to a specific line number. Line numbers quoted are correct at time of writing.

Go to line 653 and comment out the following two entries.

Scroll down a few lines and to where it says

and add the following line

Almost done, now go to the very end of the file (press page down a lot) and paste the following

This creates a 32GB cache with the files stored in /usr/local/squid/var/cache, you can make the cache as large as you like.

Complete file can be seen on Pastebin.

We wont be using this

To start Squid and have it run when the computer starts

The following instructions are Catznip specific, for other viewers please refer to their documentation. These steps are required. Once completed relog.

In Catznip, open the preferences (CTRL+P), select the 'Setup' tab and press the 'Adjust proxy settings' button. Enter the network address of the machine now running squid, in this case it's named 'MiniMac', If you are running the proxy on the same machine as you use for secondlife it will be 'localhost'. Make sure the port is '3128', and most importantly then at the bottom set 'Other HTTP traffic..' to use the proxy. 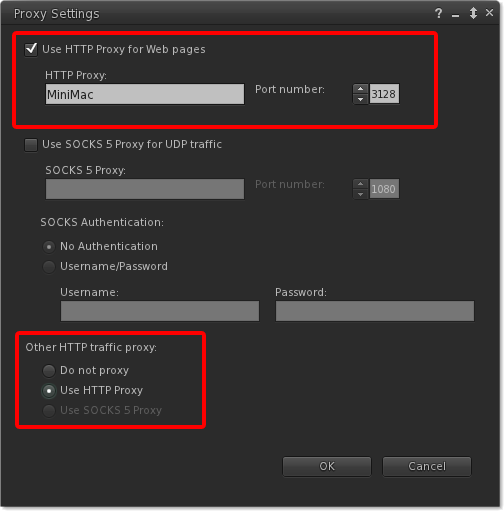 You can now reduce the viewer cache. Preferences, 'Advanced tab, move the slider to the desired amount. We do not recommend you set this smaller than 1GB. While here, press the clear cache button. 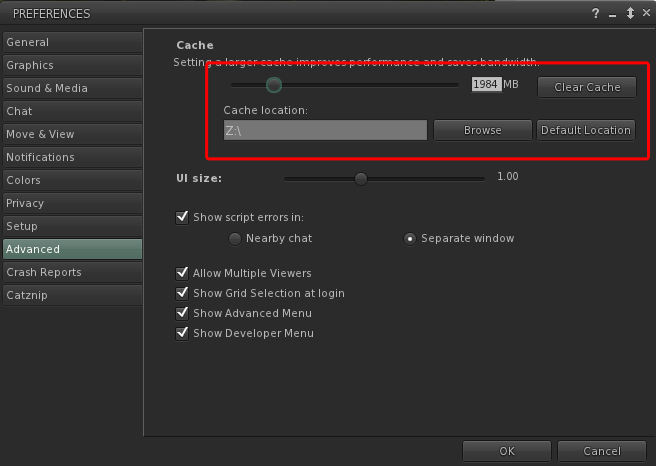 Catznip ships with HTTP textures disabled by default due to some long standing issues with some domestic routers.

Enable the 'Developer menu' by pressing CTRL+ALT+Q or via preferences. 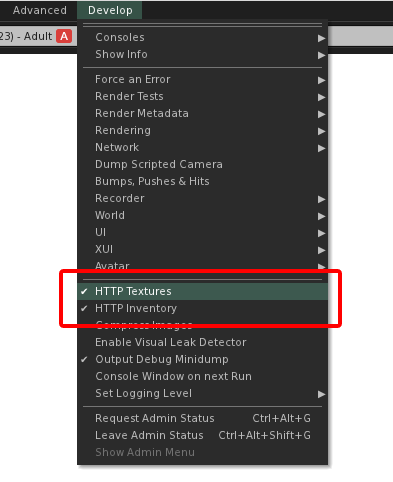