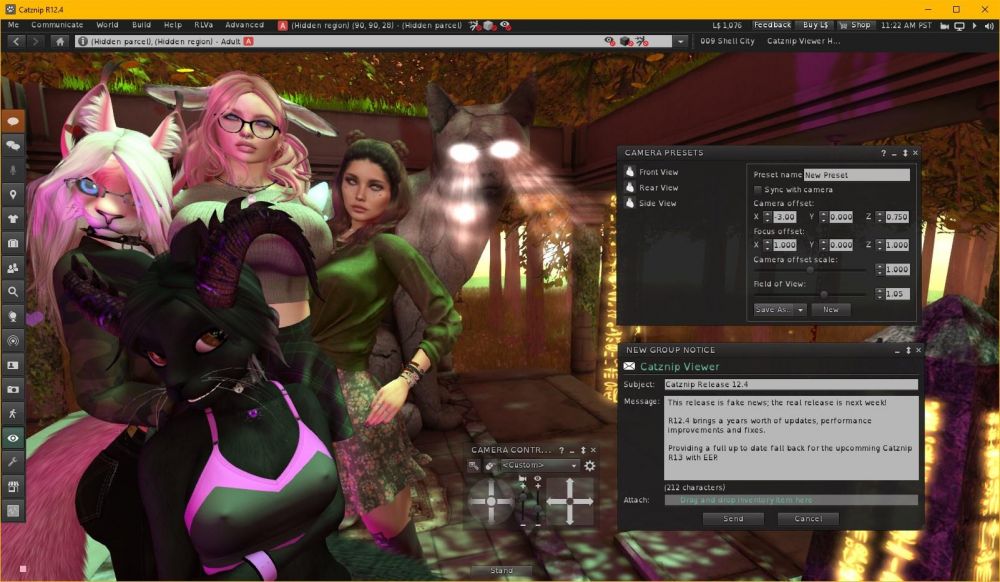 TO DO INTRODUCTION TEXT

The viewer has had the ability to let you change between 3 fixed camera presets for a while now; or even to set a custom camera viewpoint for those who wanted to delve into the debug settings. With the camera presets feature Linden Lab made it all a lot more accessible to everyone, even if it did come with quite horrible UI (it doubled in width – see below).

From experience we know that people prefer a very minimal camera floater, so I did my best to keep things as tight as possible while still making the new feature easily accessible to everyone.

You can read more about the feature and how to use it in Inara’s tutorial @ https://modemworld.me/2020/05/19/tutorial-viewer-camera-presets/ . Do keep in mind she is referencing the official viewer’s user interface, but everything should be clear enough to find your way around in Catznip if you keep on reading below 😊.

In integrating the feature we also came up with a few innovations of our own. For instance, you might have noticed there are now two sliders in between the orbit and pan controls:

Additionally, both will now snap back to their default when resetting the camera (by hitting Esc). If you do want a different FoV you can change the default and then save your camera preset (see below) and it will always snap back to your desired value on reset.

The dropdown lets you choose from your available presets and we have included the popular Penny Patton ones in the viewer by default. Pressing the gear icon will open the presets floater which is significantly different from the official viewer’s (which confusingly has 3 separate floaters to do the same thing). 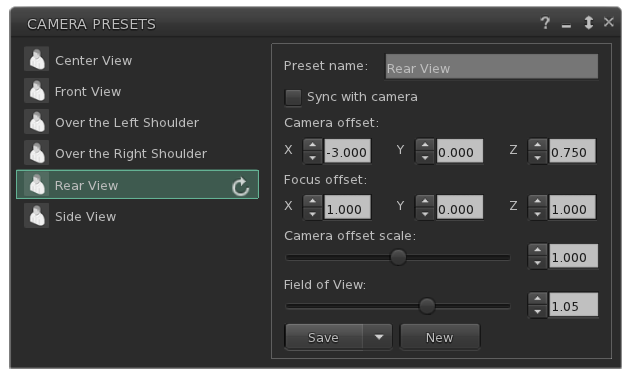 On the left side you will see all presets. Clicking one will show you its detailed values on the right. The ‘Refresh’ icon will only show on presets that are included in the viewer by default and allow you reset them back in case you’ve made changes to them that you’re not at all happy with.

To create a new preset, simply click the New button at the bottom right. To save your changes click Save; or click the down arrow to save your current values as an entirely new (custom) preset.

You can immediately jump into changing the values; however you also have the option to pick ‘Sync with camera’ and move your camera into a rough starting position. Then uncheck the option when you have positioned it where you want it and tweak the values slightly to your liking before saving.

To delete one of your own custom presets, hover over it on the left side and click the trash icon that appears.

Finally: remember that Catznip has a transparency slider specifically for the Camera and Move floaters at the Me menu / Preferences / Colors tab. If you are one of the people who always keeps (one of) those floaters on screen, setting a low opacity will leave it accessible but not obscure part of the world. 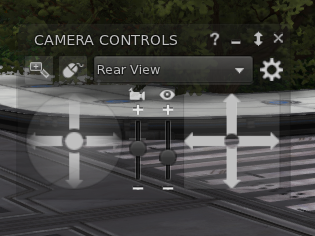 I have added an option to control the height of the beacons which is particularly useful if you are trying to find the one scripted object in a sea of red lines that stretch to infinity.

Using a height value of 4 for instance will give you a lot more spatial detail on where each beacon is located and marks tracking down an object so much easier.

I have also added an optional specifically to highlight light sources which can be useful if you’re trying to set up a picture or any situation where you might have an unwanted light source that isn’t immediately obvious.