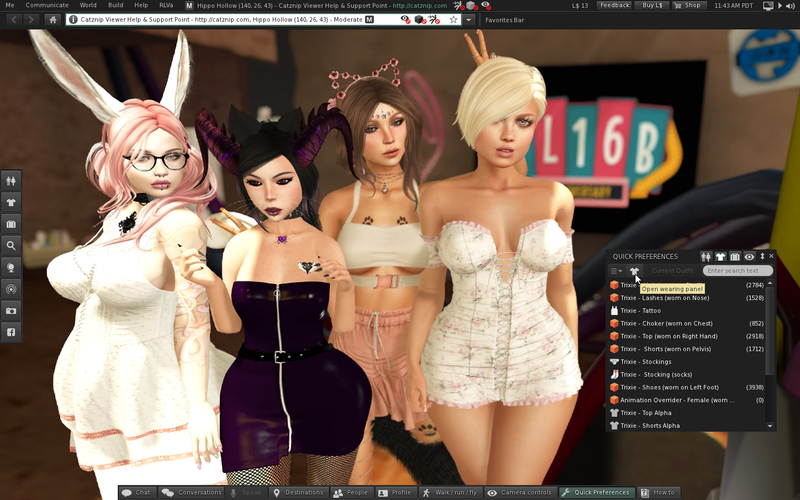 This is largely a maintenance and 'quality of life' release. I’m trying to do these more frequently (ideally every couple of months) and decouple them from the major releases with all of the new shiny in them.

Unlike a major release there will only be a short transition period during which the previous release is still useable. After 2 weeks or so (starting around July 19th) the new release will become mandatory for all users. If you experience any problems please alert us sooner rather than later (or make a feedback submission from the viewer!).

Finally, a big, big thank you to all the people who keep supporting us on Patreon! I've finally managed to track some (well, two) of you down in-world and you can see Kitten & Butta in this release's picture. Hopefully we can include some more of you in the next couple of releases 😊.

We’ve had some really good feedback about the new release notes format for the past 2 release so I’ll keep trying to highlight new (or changed) features with a little blurb attached 😊.

The ‘Worn Items’ and ‘Quick Inventory’ panels on the ‘Quick Prefs’ floater were introduced in R12 and have been a big hit. R12.2 just adds some more improvements to them:

Clicking the shirt icon on the ‘Worn Items’ quick prefs panel will open its larger brother.

Similarly, the new inventory icon on the ‘Quick Inventory’ panel will open your inventory with that folder selected and opened.

An ‘OMG how did we not think of this ourselves?!’ request by a user adds a highly useful menu item to the right-click menu of any attachment:

Clicking the menu item will open your inventory with the attachment’s inventory item visible and selected.

A user reported that it wasn’t obvious to them that closing the inventory filter floater wouldn’t reset / clean up the filter options on that floater so I added an option to do just that in case other people are similarly confused. With the option checked, closing the floater will have the same effect as clicking the ‘Reset Filters’ button. 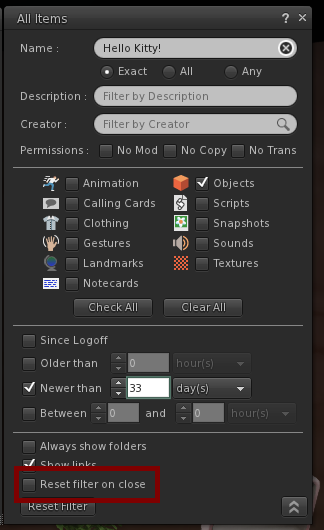 Another user request of a simple feature: by default the sliders is all the way to the left. Dragging it to the right will increase the distance between the name tag and the avatar.

‘Collapse All Folders’ vs ‘Collapse To Folders’

The ‘collapse’ button has been there for a long time now on the inventory toolbar and resets your current inventory view to just showing only the top-level folders. However, sometimes you typed in a keyword (or otherwise filtered your inventory) and want to see the folders, but not the items.